Joel Esler's a SANS handler, today he wrote about Apple's Software Update.
Unlike Joel, I do have a Windows machine. I have a Boot Camp partition on my iMac, and so obviously have the Apple Software Update tool installed (it's part of the drivers installation, so it's not like I had a lot of choice, but I didn't mind it at the time). My wife's PC is also Windows, since she shares it with her daughter, although my wife mostly uses her iBook. So, I can confirm that the download has moved from "update" to "new software": 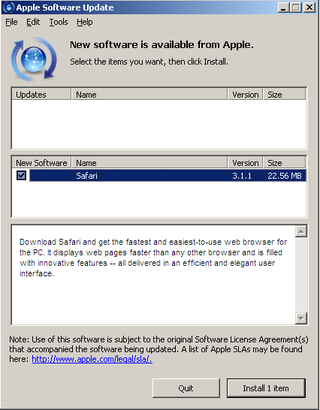 Like most, I was very disturbed by the idea of Safari suddenly appearing as a security update. My wife wasn't sure if I or my stepdaughter might have installed Safari on her PC, but I don't even use it on my Mac, I prefer Firefox on all platforms.
Joel explicitly asks two questions, and I believe a third for rhetorical purposes which I'm going to answer anyway.
1) Is it enough that Apple moved the download to a new heading? Sure. I don't mind Apple saying, in effect, "Hey, you like some of our software, maybe you'll like this too." It's a bit pushy, but whatever.
2) Should it still be checked by default? Definitely not. It was annoying when I was applying QuickTime updates, and it still is. I don't like downloading stuff I'm not going to use, and I'm sure one of these days I'll download it by mistake because I'm in a hurry to get to work or whatever. So boo to Apple for that.
3) Will any reporting Apple does of an installation base as a result of counting downloads be "a real metric"? No. Never was. I've personally downloaded Firefox - various versions since 0.2 up to 3beta5 - probably several hundred times, and have personally installed it a thousand or more times. Obviously not all of those have been for personal use, but I can't guarantee that my mother in law uses the installation I gave her (although I think she splits time between it and IE). I use it everywhere, but I have several machines, all of which have been reinstalled at least once apiece. I still should only count as one user, not iMac OSX+Boot Camp, 2 G5s at work, Linux PC + 3 VMs, Powerbook, work+home Windows PCs = 11 installations. Same goes for Safari: I have it installed on all of my Mac machines (4), but use it on none of them.
However you cut it, while I think it's perfectly fine for Apple to make Safari downloads available through their update tool for Windows, it's not cool to have it install by default - there's absolutely no reason to do it. If I accidentally install it, I'm unlikely to use it (or even be aware that it's available), and if I install it on purpose, I would have done so anyway.