Lenovo can be pretty stupid too.
They make a desktop battery charger, which holds the battery in sort of a slot, and you're meant to plug something into the charger. The battery contacts don't go into the slot though, there's a separate cable you're meant to plug in. Problem is, with the bigger batteries, that cable is stretched (and it's a stupid design for the smaller batteries anyway.) Courtesy of $BOSS: 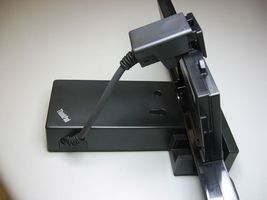