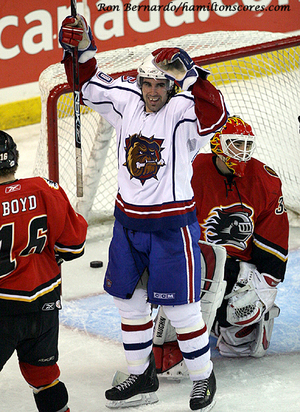 Not that it took any great stretch of the imagination, but I think I called it. 6:15 of icetime, including 52 seconds of PP time (all near the end, I think, when the game was already lost). He tried to go with Regehr, Godard, and Phaneuf, but only Godard was willing and the referees broke them up pretty quickly. Nice cheapshot from behind by Phaneuf to knock him over in a scrum though. (Smith got Regehr later, not that that was much of a battle.) He just missed putting Zyuzin through the boards though, and therein lay the crux of young Zach's problems. Put him on a line with Nedved and Oates, and they could compete for slowest man on the ice at the All Star Game. He definitely has game, he has spunk, we didn't see enough of his stickhandling to really know, and 0 shots means we don't know how good his is (not that anybody was scoring on Kipper tonight). But man, is his skating rough. He also looked a bit tired out there at times, although maybe it was just that he has two gears: first and reverse.
He didn't play exceptionally well, although he made some good plays and no real bad ones. The misconduct at the end was cautionary on the part of the referees, I think, and not really his fault. He was doing his job, exactly what MacT told him, I think - try to get on Phaneuf and Regehr. The latter worthy manhandled Hemsky a few times nevertheless, while I saw a distinct lack of handling of Huselius and Tanguay. Granted, those two are so slippery that maybe that's difficult, but there's got to be a way to get in the cheapshots on them. You don't have to kill them like Boogard apparently tried to do to Hemsky (I missed Coach's Corner, my wife wanted the Xbox, sigh) but a shot and a warning: tell Regehr to lay off Hemsky, or you're next.
Will Stortini draw in again? Hard to say. If Stoll is out another game, maybe, but unless he can get his skating to the point where he can run guys down, his only effectiveness will really be as a corner-mucker and a scrapper. Deity knows the Oilers can use guys who will get their hands dirty and their knuckles bruised right now, but those guys also need to be able to skate well enough that they won't be a liability on the road or when they're exposed at home. I'd say maybe to stand in front on the power play like he tried to do, but that's a laugh - the Oilers PP would have to gain the zone and stay there for more than two seconds, something they've shown a distinct inability to do lately.
On the whole, just by playing in the bigs he's covered his draft number - 3rd round, 94th overall - even if it was partially because of injury. 1 NHL game puts him ahead of two first-rounders from his year (including Hugh Jessiman, somebody several HFBoarders were lusting after), as well as vast swathes of others drafted before him. He's obviously coachable and team-first (something you would expect from a young man who captained his junior team for a couple of years in a tough town), but he's got some major improvement to do if he wants to inherit the mantle of Ethan Moreau and Kelly Buchberger, never mind Georges Laraque. Grade him a C+ overall for tonight, and a B considering everything else. (Overall he'd have had a better score if he'd pissed off Phaneuf or Regehr so much they took an instigator - maybe he should take Finnish lessons from Tikkanen.)
(Photo shamelessly grabbed from Hamilton Scores.)