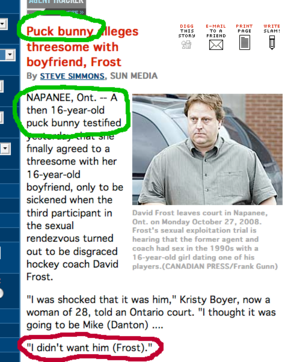 Steve Simmons shows us how it's done in the highly respectable mainstream media.
Highlighted in green we see what Mr. Simmons, who presumably has a journalism degree and therefore also possesses the highest possible level of ethics seen in writing, thought was the most important thing about the case. She was 16, had a threesome, and liked hockey players; ergo, she's a puck bunny.
Highlighted in red we see what Mr. Patterson (that's me in this case, not my father) thought was probably the most important thing about her testimony. I'm a scumbag blogger who writes the word "shit" because he can, and I possess no ethics whatsoever.
Contemplate this with me for a moment, if you will. We have a 16 year old girl; she can get married (with permission) and drive a car (with an adult licensed driver present), but that's pretty much it. She's not old enough to drink, smoke, serve her country, or even get a good job, because she's not mature enough to understand what signing a contract means. We also have a 16 year old boy, same deal, perfectly normal except he also happens to be a hockey player.
And we have that boy's 29 year old coach, having a threesome with this boy and this girl. A coach we know has control issues. Do you suppose it's outside the realm of possibility that he might have said, "Gee, playername, I like your girlfriend, she's hot. Do you like your ice time?" Indulge me and suppose with me a bit further; maybe he doesn't even need to say that last. Everything we know about this man - which, yes, is inadmissible in court, but I'm not a judge and neither are you - says it's pretty likely.
She's a puck bunny, David Frost is merely disgraced. And we wonder why women won't testify at rape trials, or why this no-longer young woman didn't want her name to be published. "What does she have to fear?" If you didn't already know, now you do.
If writing shit like that is what makes somebody a respected professional journalist, I'll stick at home with my couch and decent paycheque, thank you very much. Fortunately, we have Gare Joyce's ESPN column from a few weeks ago to provide a much better story about what went on.

Update 2019-09-01: The original Gare Joyce link is broken. The story was re-posted and appears to have been updated since.