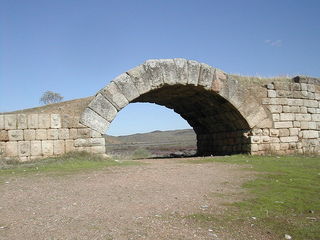 In the spirit of Lowetide, this is a picture of the Puente de Aleconetar, a bridge in Spain built by the Romans. Unlike LT, I was not around when the bridge was built, so I can't tell you much more than I found it after a few minutes of browsing around at wikimedia.
I've not been posting much actual hockey recently, since my life has been busy and I've been out of the "sphere" for the last several weeks. I wondered why David Staples commented on a post that's over a year old, but now that I've done some catching up in my RSS reader, I guess I can see why. There's a lot of infighting and something I can only describe as penis-waving going on.
I'm also seeing a lot of whining about how the "sphere" ain't what it used to be in the long ago far away of The Great Exodus From HFBoards. Here's another older post of mine, similar in theme if not content.
All you guys who are whining about how things aren't like they used to be, and you want some other place that's more comfortable? Shut up and make your places the way you want them to be. The tubes change. They change every day. I've been around one hell of a lot longer than most of you all who are bitching and moaning and tearing at your hair, and I'm here to tell you, you can spend your time bitching about change, or you can adapt to it. One of those is productive, and the other isn't. I'm sure I don't need to hold up a sign to say which is what. In other words, build a bridge and get over yourself.
Would you rather bitch, or produce?
And with that, *I'm* off to be productive.
(Link to original photo, including Creative Commons 3.0 license under which it was distributed.)