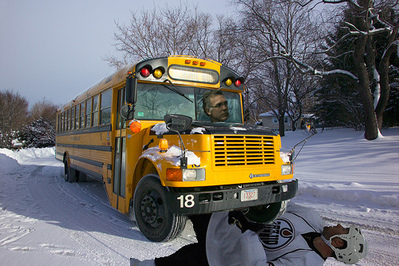 Dustin Penner (pictured) is not in the coach's good books, and as if the scratching Saturday night wasn't enough, MacTavish let the media know today.

"He's never been fit enough to help us . . . he was signed to be a top line, top two line player . . . we thought the contract was a starting point for him, and he just viewed it as a finish line, and it's just been one thing after another."

Other words that got mentioned several times: consistency, work, motivation, "total lack of jam."
Is Dustin Penner what's wrong with the Oilers this year? Is he the reason why they've had trouble scoring and can't seem to get it out of their heads that passing across the ice with two defending players right there is a bad idea? Is he the one taking penalties with a 2-1 lead and 2 minutes left in the game? No, he's not.
Is Dustin Penner a symptom of what's wrong with the Oilers this year? Is his inconsistent play, his seeming lack of motivation, his bare minimum approach to the game, a demonstration of a greater malaise affecting most of the team? Yes, he is.

"The last thing I'm going to say about Dustin is the emphasis is on him to get his game to a level that he can help us. To this point it hasn't gotten there. Where do you go from here? He's gotta get it and get in there. Hopefully he'll be more motivated than he's been to get the . . . consistent competitiveness."

(If you haven't listened to the audio yet, you should. MacT sounded just like a parent throwing his hands up in the air over a rebellious teenager, something with which I have more experience lately than I'd care to admit to.)
MacTavish said Saturday night that Penner and Brodziak were the ones getting it in the neck, but it could have been several other guys too. Who else could those be? Smid's been a healthy scratch already this year and MacTavish was talking today about moving him up to the wing (!?) "to add some jam." I would say that other guys on the chopping block are Pouliot, Gilbert, Nilsson (Saturday night's performance notwithstanding), and maybe even Cogliano. Cole can't be too far behind; this year he's been like a Penner who hits more often, but he's had some cherry minutes with not much to show for them too.
Lowetide has a post up already about this (posted while I was working on that lovely picture) and I expect most of the rest of the sphere will follow shortly. LT asks, "What then do they [MacT's words] tell us about Kevin Lowe?" I think the answer to that isn't as interesting as one might guess. All his words say is MacTavish thinks Penner isn't living up to his contract. Lowe probably didn't present Penner to MacT as a fait accompli, it doesn't sound like MacTavish is saying the contract was a mistake, and I doubt he's absolving himself of responsibility.
The "coach lost the room" is a bullshit excuse promulgated by various groups of 20-30 grown men who want to point the finger at anybody but themselves. MacTavish is correct when he says that Penner (and others) have been doing the bare minimum to get by. Some would say it's the coach's job to motivate those players, and that if he can't, he should be fired. I don't agree, and I don't think MacT does either.
I heard it said once that when a coach calls out particular players from a team that's under-performing, he's not necessarily singling those guys out as the worst or only offenders. He's picking on those guys, because he thinks they have the strength of character to understand what's going on. I think if you look at their backgrounds, it's likely that Penner and Brodziak are such. Dimestore Psych 101ism, but this is the internet after all.

The frustrating thing for me is that he's got the game, and he just can't find it. . . he's got a great set of tools, he just needs more horsepower.

While Penner is hardly the fastest guy on the team, I'd thought he looked miles better this year than he did last, and he hasn't looked gassed near the ends of his shifts. I'd have thought that a fatbody would be one of the last guys you'd want out on the penalty kill, and Penner's spent enough time there this season that it's not just a mistake. I don't think a coach who'd healthy scratch a guy like Penner would give him PK time to make up for the lost PK time either.
While I'm on the subject, I do find some of the coach's decisions curious; at the risk of sounding like one of the defenders of Jani Rita a couple years ago, Penner's hardly had consistent linemates, and why Gagner (who's done no more than Penner on the power play this year) kept getting Penner's spot on the #1 unit is beyond me.

Hopefully he'll be more motivated than he's been to get the . . . consistent competitiveness.

Hopefully Penner isn't the only one who finds it.