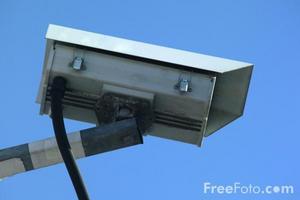 This is good news.  Rape is one crime for which I wish we still had capital punishment, and while I hesitate to quantify assault, this is pretty low even as far as rapes go.

I'm disappointed that they didn't have security cameras to start with -- that would have been very helpful," said Jackie Long, a first-year student.

is somewhat . . . disappointing, I guess.  I understand the motivation of the comment, but I don't believe that security cameras really help with crime, either in its prevention or aftermath.  It would seem that Londonians (Londonites?  Londenizens?) would agree.  Granted, a residence hallway is not the same thing as a crowded street, but I'll just repeat what I said to some fellow staff members who considered cameras in our hallways after a breakin: the last thing you'll see on a camera is likely to be some guy wearing a hoodie and a mask smashing it.  A camera wouldn't have prevented those women from being raped.  It may not have even allowed for faster collection of suspects.

It's not that I don't trust campus police here (or anywhere else), it's just that I don't want to have to trust them; to me, the risks outweigh the benefits.  Like night lights, cameras provide a certain feeling of security that is largely illusory.  Worse still, they don't replace a human being - but you can be sure that they would provide a dandy excuse to cut back an already stretched police force.

If we want our campus more secure, I believe we need to do two things.  First is to place more power in the hands of individuals.  Encourage people to say something if they see something happening that feels wrong, and create a culture where asking somebody "what are you doing here?" is not going to cause hard feelings.  Second is to increase presence.  I see police cars every now and again on Ring Road, but it's generally fairly clear that they're travelling from one place to another, not actively looking for things.  Have officers walk about.  Have them talk to people - not in an interrogatory way, in a friendly way.  Let people get to know them and, more importantly, let them get to know the people.  Then they're more likely to recognize when something is wrong.

Without that, coating campuses in cameras will do little than to provide a lot of footage for the news media after something goes terribly wrong, and could lead to major civil rights violations in the hands of unscrupulous people.