Here's how lame I am. I started this in May by copying the questions into a new post, saving the draft, and then forgetting all about it. In honour of Pookie and Schnookie, here's a picture of Marty Brodeur to accompany my entry, instead of the usual vaguely-related Oilers pic. This is my entry for the IPB Blogging Questionnaire. 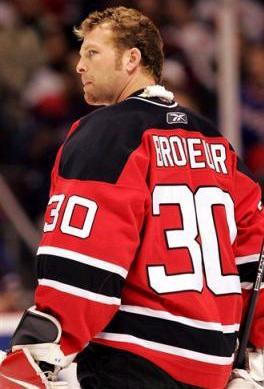 1. What was your motivation for starting blogging? Has that changed at all in the time you've been blogging?
My motivation is mostly to have an outlet for these thoughts that would otherwise rattle around in my head. I could just write them down in a paper journal (and I sometimes do) but I'd like to think that I can occasionally contribute something interesting enough that others would want to read it.

2. What do you think your blog contributes to the hockey conversation?
Tough question, given that my blog is as often not-about hockey as it is, but I'd say mostly some interpretation of the goings-on in the hockey world, particularly as concerns the Edmonton Oilers.

3. What do you want to get out of the blogs you read?
I want them to be worth the time I spent reading them. That can be simple entertainment - hockey aside, I don't watch much television or many movies - or it can be interpretations that hadn't occurred to me. Ideally they'll make me think while I laugh.

4. What determines which blogs you read and which you don't?
They need to be original, and they need to either be informational or entertaining. Ideally they're all three, although those sorts of blogs are rare.

5. How important is the issue of gaining press access to you as a blogger?
I really don't give a toss about this. I don't have an NHL team within 200km of my current location (the Leafs don't count), and while I casually follow junior hockey, I'm not very interested in writing about it. I suppose it might be nice to get some dosh for my time spent in writing, but I'd need to write a lot more and a lot better for that to happen. Since that would require a large chunk of my time, it's not likely to go.

6. To what extent do you feel accountable for the content of your blog? How concerned do you think readers should be about the authority and accountability of your blog?
If I write something factually incorrect, about hockey or anything else, I want to be told. Part of my accountability would be to give credit to the corrector as well. I'd like readers to know when I say something whether it's my opinion or fact, and that my opinions are backed by some set of facts.

8. What value, if any, do you think blogging brings to the NHL?
It gives fans a voice that we otherwise would not have. Like anything else, when you give people a voice you sometimes wish they would exercise their right to shut up, but that's life. Even if only 0.1% of what's written is worth reading, that's still a valuable contribution.