I haven't graded since 26 April, so I'm pretty rusty. I think the Oilers would sympathize. I barely had any pluses or minuses against any names at all, which could indicate that my powers of observation were lacking, or that no Oiler really did much to stand out one way or another. Either way, not a great game, but the only terrible came at the worst possible moment. Sadly, I realized about five minutes before the game that I have no recording device, so some details of some plays will have been lost to the vagaries of an old memory and whatever replays I can find online.
Smid, 5: 13 minutes of icetime. He was on the ice for 5 total goals - Glencross, Penner, Dawes, Brule, and Gagner. Dawes scored on the power play, as Phaneuf played the old "hey guys, watch this, five feet wide and off #5's chest and in!" bankshot. I'm not sure how that goal went to Dawes, but it doesn't matter. Smid wasn't really at fault there, and by the same token he wasn't much of a player on the three Oilers goals. He was scrappy at times, and had not-terrible coverage most of the time, so a 5.
Horcoff, 5: 19 minutes on the ice, 4:11 of PP time and one shot. -1 wasn't deserved, he was on the ice for Moss' second goal. He won faceoffs and wasn't bad defensively, but he needs to do more offensively. He was out against Iginla's line a lot in a power vs power matchup a lot, and while they were bottled up several times, they did their own share of bottling as well. Maybe deserves a 6 for helping to shut down Iggy et al, but the guy needs to put some in the net himself.
Cogliano, 4: a bit of a weak game from the speedster, not so much for what he did, but for what he didn't do. I suppose it could be a good thing that he was almost unnoticeable, but his line wasn't really a checking line. Showed good moxie getting up after being crushed along the boards, but he wasn't zooming around much. Maybe it doesn't do him any good to be lining up with two of the slower Oilers, but there's not many who can keep up with him anyway.
Moreau, 6: weak penalty and he was barely used on the PK, odd for a checking winger. Yet his hit led to a rushed pass that got bobbled to Gagner, so on the whole, a good game from TheCaptainEthanMoreau. If he plays just like that most nights, the team should be ok - it'd be better if he could eliminate the weak penalties altogether though. Not a bad night for 11 minutes of icetime.
O'Sullivan, 5: On the plus side, he had 6 shots, and some of them were pretty good chances. Another 3 missed the net, at least one of which would have been a golden opportunity. On the minus side, none of his 9 chances went in. What's better, a guy who gets 5 chances and 0 points, or a guy who gets 2 chances and 1 point? I also thought he should have had better coverage on Moss' first goal, although that being a penalty kill maybe he was where he should have been, I don't know.
Jacques, 4: 3 shots, 5 hits and 2 shotblocks. I thought only one of his shots was good, and he wasn't creating a lot. 4:07 of PP time, with which he did little. Maybe he needs a few games to settle in, but I can't see him staying with Hemsky for long. I love his effort, but he's a bigger, slower Liam Reddox on the top line at this point.
Staios, 6: I was shocked that he had nearly 20 minutes of icetime, which is a great thing if you're a defensive dman. 2 shots and one blocked, 1 blocked shot. He was a bit of the goat on the first Moss goal, I think he lost track of the Flames players and they got between him and the net. Still, a pretty decent outing from the former Thrashers captain. I thought the holding penalty was weak, his roughing one is forgiveable. 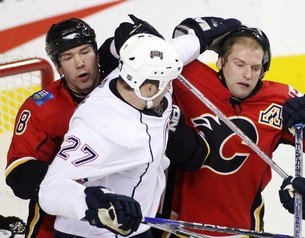