I don't have too many thoughts beyond agreeing with most of what Staples said. That being said, I disagreed with several of the grades he assigned players, and said so in the comments. (Maybe I should have saved my comments for this post.) The second period was a total dog's breakfast, but in general the Oilers were schooled in their own end, couldn't get much of a cycle going in the attacking zone, and would generally have been lucky to come out with even a single point, never mind the two they did get. Colorado got cheated.
The plus is Penner's got 2 even strength goals already (on track for 164!), and if he keeps up his play, MacTavish is going to have a hard time justifying keeping him off the power play. It was good to see he can do well killing penalties, something I suggested last year; if he could somehow eke out a bit more speed or figure out how to better use his size, he'd be good. Garon played well, even if it did take a couple of posts to keep the score even, and the team looks ready to take care of itself physically. 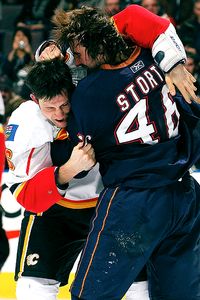 This picture (Zack mauling some poor Flame) exemplifies the minus. Their defensive dmen are too slow to break cycles against the likes of Hejduk and Stastny. They got dominated on the faceoffs, which is going to burn them at some point, and their hitters weren't really hitting. Ethan Moreau in particular looked a bit out of whack, and Stortini's usually good for a thunderous hit but was pretty quiet all game. The game reminded me a lot of the Garon wallpaper the Oilers have available on their website: the goalie and a bunch of faded guys.
In other words, they played an ugly game but held on long enough and did enough things well enough that the final score was respectable. Still, 2 points is 2 points, and they count the same in October as they do in April. They'll need to be better next game though, that's for sure.
Oh, and a 150ish foot tall Sam Gagner on the ice? Comedy gold.