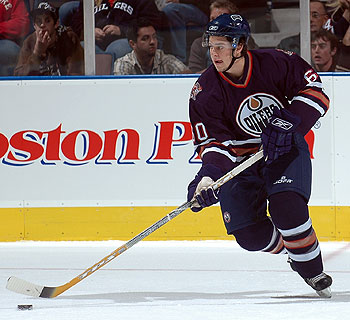 I'm sure I'm not alone in saying "who?!".
The Edmonton Thundering Penguin-BulldogStars apparently didn't even draft this cat who's been called up to the big club (look at that precious little stock car number on his sleeves, wook soo cuuute) in order to take the fifth blueliner spot, leaving #6 open. Or maybe Petersen's drawing in the #5 spot. Who knows, and who cares - does it really matter anyway? I mean, some teams have been hit pretty hard over the years, but this is insane - and it's certainly as bad off as I ever recall the Oilers being. Maybe it's just as well the club was out of it weeks ago anyway - they're showing some game, at least according to the stats, but it would be heartbreaking if they had actually been in a playoff position before the deadline, kept Smyth after all, and then gone on this run of ouchies. I'm not sure that any team could recover from this.
I'd say "oh well, maybe next year" but I've been saying that for weeks already anyway. Man oh man, what a train wreck. I wonder if the boys are playing ping pong? (Blatant Gzowski reference that was.) Of course, given the number of shoulder injuries, maybe it would be best if they weren't anyway - shades of Moreau's ankle.
(Photo credit: edmontonoilers.com, as if you couldn't tell.)