... yeah, a callback to the horrific Isles jerseys of a few years ago, I couldn't help it, but look: 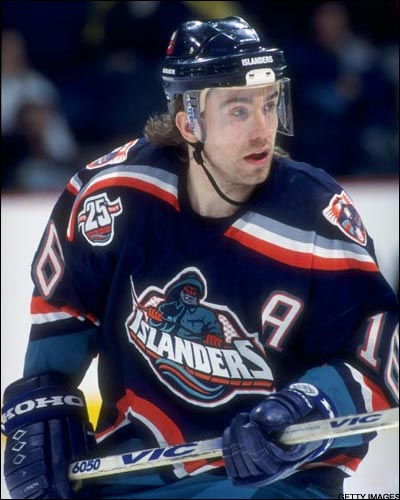 Doesn't it look a bit like the ol' fisherman has a bit of a mullet? With the hat and all? Maybe the hat is hiding it. Just a little? Ah well. Ziggy's got a bit of the mou-let going on there too.
What I started this post to say though, was there's a lot of this sort of thing going on in the internet's tubez: "we traded our [identity|face of the team|heart and soul], Lowe's an idiot for not giving Smyth what he wanted, this was just money!"
My post from yesterday notwithstanding, and with the qualification that I agree that Ryan Smyth was the face of the franchise, I do not believe that the mere act of trading Smyth at this stage of his career was an the act of an idiot. As Lowetide said, this isn't a terrible return (unless you're convinced that O'Marra and Nillson are both busts and have drunk the Kool Aid that the Oilers are the worst-drafting team in history) - it's certainly at least on a par with what Lowe got for Chris Freaking Pronger, the perennial Norris candidate and former Hart winner. Looking at that and what other top-line players went for, it's about right - so the deal cannot be criticized on those grounds alone. As others have said, any return at all for a pending UFA is pretty good (we all remember what happened with Luke Richardson and Curtis Joseph).
Was it just money? Lowe says not, Meehan says not, and Smyth isn't talking. Maybe they're all covering their butts, maybe not. I really seriously doubt that Lowe would let a guy hang for a mere matter of a few hundred thousand, like many are thinking. (5.2 vs 5.5mm are the figures I hear the most.) The man who signs Fernando Pisani to 4 years at 2.5mm per is not the man who quibbles with his top left winger, assistant captain, and 12 year veteran over a mere \$300,000. So if they're lying and it *was* just money, I'd be inclined to think it wasn't \$300,000, it was at least double that. So I'm arbitrarily tossing this one out for the purposes of this argument.
Did Smyth take a dump in Lowe's breakfast cereal? Lowetide thinks, in comments, that maybe Smyth got the cold shoulder that Lowe patented on Mike Comrie. It's possible that there was something backstage, and Smyth's comments about not taking a hometown discount may have been indicative of something bigger, but none of the players in this game are really acting like that was the case, unless they're just closing ranks to save everybody face. I'm not convinced that this happened.
So, what then? Did Lowe just not really want Smyth back at any price? Were the salary negotiations just a sideshow? I don't think so. What do I think then? A little from column a, a little from column b, perhaps. Let's say a difference of 500k plus, or perhaps a year or two worth of contract, combined with a knowledge (if not an admittance) that the playoffs are just beyond the grasp of this year's team means a trade before he's lost for nothing. A hockey decision that's also a business decision.
That returns me to my original point: the cry that Smyth needed to be signed at any price under Pronger-dollars. My heart wants to agree - witness yesterday's post - but my head says an emphatic no. Did Lowe take the optics into situation? Clearly he was aware of what Smyth meant to the city and the team - his comments earlier in the year about knowing he'd be in trouble if he ever traded the player, his withdrawl from the honouring last night of Mark Messier (despite how much that had to have hurt him personally) point to this.
This was, however, a man who played with all the greats, all the Boys on the Bus, and left near the end - he saw them all go. He knows that trading great players, and being a great player who is traded, is not the end of the world. Faces of the franchise in Lowe's Oiler player days were Lee Fogolin, Wayne Gretzky, Mark Messier, and Lowe himself. All were traded, and the team had success after each successive trade anyway. Lowe knows eventually the team would have to move on from Smyth, and felt that trading Smyth now was the right move now.
Whatever the reason, Kevin Lowe had a plan. He did not make this trade in a panic. It was coldly calculated, and while I believe Lowe when he said it was one of the most difficult telephone calls he had to make, I also believe that the decision, once taken, was final. There was a plan here; it may not have been the plan with which he started the year, but it *was* planned. Money may have been a factor, but it was not "just" the money. He traded the face of the franchise, but teams do that all the time. It would have been nice if Smyth had been an Oiler for life, just as Yzerman was a Wing for life and Sakic's likely to be a Nordique for life, but that just doesn't happen. Forsberg went to UFA, Kariya did too, Al MacInnis and Theo Fleury left the Flames, Trevor Linden was traded - it's no shame for a great player to finish his career with a team different than the one that drafted him.
Painful? Yes. Necessary? Debatable. Related to money? Almost certainly (but it wasn't just a few hundred k). Punishment? Sorry LT, you're a really smart hockey mind, but I don't see it that way. Likely that we'll ever find out the real story anyway? No freaking way.
(Image credit: shamelessly stolen from ESPN.)