A few weeks or a month ago, I got into a conversation about politicians that looked something like this:

He was correct, of course, but that wasn't my point. My complaint was two-fold; I'll address the second half first.
I don't expect any other human being to share my opinion on everything. That would be boring, even if it did make my election-day decision easier. Besides, I don't even know what my opinion *is* on many subjects. While it would be nice if there was at least some congruency, not everything is important, and I still respect people with whom I strongly disagree. For instance, while I'm anti-organised religion, I still think Augustine was a pretty cool guy. I'm very much not a pacifist, but I'm friends with (at least) two practising Quakers.
That being said, there are some opinions I have that are non-negotiable. I don't think of our military as peacekeepers, for instance, and would have difficulty voting for anybody who would neuter our armed forces in such a way. I think our poor and middle-class already pay their fair share of taxes, so if the government needs more revenue, take it from the 150k+ annual set. I don't mind at all if gasoline hits European price points, and I really don't mind if the government takes better than half that in taxes. The first opinion puts me in strong opposition to many in my demographic, and the latter two would actually put a fair crimp in the lives of many more of those, but c'est la vie.
I don't actually care if a politician is like me. In fact, it's difficult to find anybody at all even close to me, never mind precisely like me. How many former soldiers do you know who have a BA, are earning another, and work as a system administrator in a school of computer science while paying for their disabled common-law wife to go to university? Thought so.
What I care about though, is politicians who claim to be like... well, anybody else at all. How many times have you heard "I'm like Joe Sixpack, I like beer and hockey and I know what it's like to be lower to middle class"?
Stephen Harper does still actually sit in the stands at hockey games, but he does so with a retinue, unobtrusive as it is, and he can't pick a favourite because whatever he picks, it's wrong. Sarah Palin may indeed once have been the moose-hunting hockey mom she professes to be, but she isn't any more. She's a state governor turned VP candidate. Even Liz May, who tipped a few pints back at the Grad House on campus here, is not much like you or I. She's the leader of a national political party and when she speaks, leaders of other parties listen. Andrew Telegdi was once an undergraduate student at the University of Waterloo, but he hasn't been for as long as I've been alive. 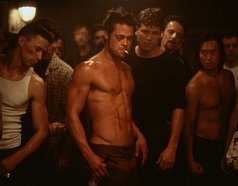 Tyler Durden says: "Sticking feathers up your butt does not make you a chicken!"

Politicians are nothing like me or you (unless you're a politician too), and it's insulting when they pretend to be. Even if Stephen Harper's favourite NHL team really is the Oilers, that just means that he and I both happen to like the same team, nothing more. If Liz May favours the same Grad House beer I do, that just means she has good taste. If Peter Braid runs a business like I used to, that just means we were both once small businessmen.
That being said, I found James Bow's writeups of the local candidates valuable in helping to understand where the local politicians come from. And to their credit, I don't think any of them pretended to be like me beyond the most superficial qualities: well-educated well-off white folk living in Southwestern Ontario. I didn't change my mind based on what I saw, and the candidate for whom I will vote Tuesday is not at all like me, but I'm cool with that. So should you be.