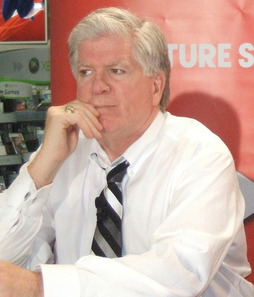 Normally I don't have a great deal of respect for Brian Burke. I think he's an arrogant blowhard, a know-it-all who exemplifies pretty much every single negative stereotype that might come to mind when somebody says "rich white American lawyer." I don't like his methods for building teams, I don't think he deserves quite the stellar reputation that he has, and I really don't like his attitude towards offer sheets and his otherwise-archaic business practises.
And then there's this. It's a bit of a long read, longer than is strictly necessary, but this is still an awesome story. It's theoretically a story about hockey men, but the sport serves only as a backdrop.
It's a story about a young man's suffering in silence and quitting an activity he loves because of his fear of what others involved in the sport would think of him. It's a story about a bluff, gruff, hard man's unconditional love for his son; it's a story about how far we've come as a society, yet how far we have yet to go.
Read it without at least blinking hard a few times. I dare you.
(Image cc licensed, source wikimedia.